Arnold August is a political scientist, author and lecturer living in Montreal. He is the author of Democracy in Cuba and the 1997–98 Elections (Editorial José Martí). He has also contributed a chapter entitled “Socialism and Elections” for the volume Cuban Socialism in a New Century: Adversity, Survival and Renewal (University Press of Florida). His latest book is Cuba and Its Neighbours: Democracy in Motion.

Julie Lévesque: Tell us about your book Cuba and Its Neighbours: Democracy in Motion, why did you write this book and how did you go about it?

Arnold August: Well I think many people will agree that when it comes to international politics, pressure by the countries in the North, especially U.S. and regarding the South in general — Asia, Africa and Latin America – there are very few themes that are raised other than the theme of democracy. It has been this way especially since the late 1980s and early 1990s  since the fall of the former Soviet Bloc, the issue of democracy or rather the pretext of democracy is increasingly being used by the U.S. and Europe as a reason to interfere in the internal affairs of other countries. At the same time, strange as it may seem there are very few books written on that issue of democracy as such. I guess not many people want to address this subject because it is a very loaded term, it’s not easy to deal with, but I always thought it was necessary. It is in fact my second book on the issue of democracy, the first one, written in 1999 dealt specifically with democracy and elections in Cuba. 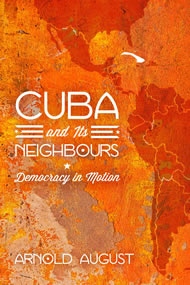 JL: I guess a lot of people would be surprised to hear that there is democracy in Cuba. What kind of democracy is it?

AA: In Canada and the U.S.especially, the whole issue of democracy is supposed to be completely foreign to the Cuban experience and now of course the same attitude applies to other countries such as Venezuela. I deal with the issue of democracy but as you notice the subtitle of the book is Democracy in Motion. So I don’t deal only with democracy as such. I try to develop the concept of “Democracy in Motion” that is democratisation as a process which never ends and, at the centre of this whole concept, I try to develop the role of participatory democracy, that is, democracy in which the people play a key role on a daily basis to make their own political power effective.

JL: Do you think people in Cuba participate more in the decision making than in Canada or the U.S. for example?

AA: Well I think you’d have to compare Cuba to what the situation was before 1959, before the Revolution. We can’t even compare it, it is so obvious there was a U.S.controlled, a U.S.-led dictatorship in Cuba before 1959 – the Batista dictatorship – and the people were completely excluded from power. In fact, Fidel Castro was running for the opposition in the senate at the time, in the early 1950’s, and it was obvious he and his party were going to win those elections. 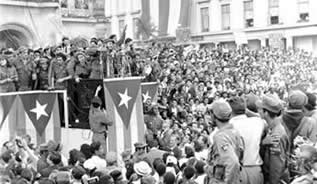 The U.S.-backed Batista regime cancelled the elections and organised a coup d’état. So it gives you an idea of the kind of participation there was before 1959. Since 1959 of course it has been developed. In 1959 it was the first time in the history of Cuba that the people obtained political power. I’m not saying it was perfect. It wasn’t perfect then, it isn’t perfect now. But the main feature of the 1959 Revolution is that for the first time, political power was in the hands of the people. Then term “sovereignty invested in the people” became a real meaningful concept in Cuba.

Now we can draw a parallel between the Cuban revolution and the rebellion in Egypt recently. I would call it a revolution because the Egyptian people revolted and actually succeeded in overthrowing the U.S.-backed dictator Mubarak. 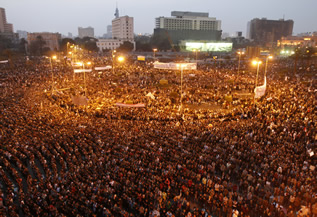 What I find interesting there, and it opened my eyes further on the issue of the need for people to look at democracy as an ongoing process, a participatory democracy, is that the people at Tahrir Square occupied the public space and it is from that area that millions of people on a daily basis made their decisions: what to do, what their priorities were, which was to overthrow Mubarak.

They would not accept anything less than that. In the meantime, a political power was developing at the base to replace the power of the U.S.-backed Mubarak regime. And in fact they overthrew the Mubarak regime. Now what did the Obama administration do right after that? After having supported the Mubarak regime, hypocritically of course, right to the last second? When he was finally overthrown the U.S. immediately tried to impose what I call in my publication the “U.S.-centric notion of politics”, that is, multi-party democracy.

I remember very clearly, and it is chronicled in my publication, that after the overthrow of Mubarak, while the street demonstrations were still going on in Tahrir Square and in squares across Egypt, Hillary Clinton said on behalf of Obama that people have to move from protest to politics. So from the U.S. point of view, people in the street organizing themselves on an entirely new basis to somehow take political power, on an entirely different orientation, even though it was only in an embryonic way, is not politics. The only politics that count are electoral politics. Then the US organized elections in Egypt.

JL: Because this way they can control the outcome?

AA: Exactly, that is what they control through elections. The US could not control Tahrir Square, the people at a very low embryonic level aiming to take political power at the top.

JL: And was there a fear there that something like that would happen in the U.S. as well?

AA: Of course, because the first domino effect of Tahrir Square was in the United States itself.

The Obama administration had to organize elections and the first thing they did was to eliminate the political party based on the Nasserite tradition which is generally progressive and in favour of socialism, definitely in favour of sovereignty from the U.S. That was eliminated by hook and by crook as they usually do and they were left with only two parties – the Muslim Brotherhood and the Egyptian National Movement Party. Both are pro-American. Now here’s an important point as far as the electoral process is concerned versus the political process of democracy in motion: only 52% of the people actually voted in the presidential elections between the two opposing candidates. 52%! And there was a call to boycott it. Of course this is not very well known in public circles. They sort of avoid that issue.

Now here are the two things in contradiction. On the one hand you have the people in Tahrir Square and other squares looking for new ways to attain political power outside of the multi-party political system controlled by the United States. That’s why only 52% voted. At the same time in order to overthrow Mubarak in that 18 day revolution 850 people were killed and 5500 people were seriously injured. Now I ask you: Is it not easier to deposit a ballot compared to fighting on the streets with the possibility of losing your life or being seriously injured to overthrow?  So it’s not because of apathy or lack of interest. It’s basically a rejection of the multi-party system that was reflected in those elections and this is why it’s still going on.

I spent almost 24 hours a day during that 18 day period watching this thing and it allowed me to expand further on the issue of participatory democracy and how elections are used in order to legitimize the status quo. Now that is exactly what Obama did when the Muslim Brotherhood won the election. He phoned Morsi and according to the White House transcript he said “Now you are legitimate.” You have legitimacy to rule in Egypt. That’s how in these countries elections are used when controlled by the U.S.– to legitimize the dictatorship of the old guard. 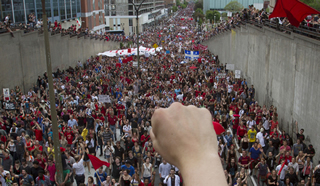 We can even come closer to home. What happened in Quebec (Canada) last spring? There were millions of people in the streets, literally, students and older people, all over Quebec and what did the Liberal government say? “Well, we were elected.” Of course only 52% of the people voted and the vote split between the two/three parties. “We were elected.” They mean: “We are the legitimate representatives of the people and we can do what we want. We have the mandate to do everything. Anything.” And so the elections are used whether in Egypt, Quebec or other countries to legitimize the rule of the old guard. Now I’m not against elections. I’m not against elections with different political parties, but we have to look concretely how it takes place.

AA: It does not guarantee democracy and in many cases it is used as a pretext to completely wipe out any struggle by the people at the base to take political power in their own hands and develop their own type of system. 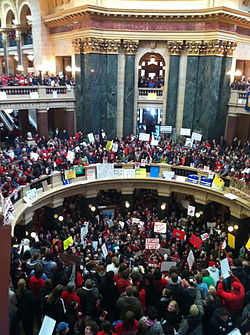 JL: How would you describe the events surrounding the Occupy Movement in the U.S.?

AA: What is interesting to note is that after the events at Tahrir Square, the U.S. were very happy to be able to replace the popular movement with the so-called elections, temporarily, because troubles were still going on and have not been resolved. Now ironically, or paradoxically and with justice, the boomerang effect or the first domino effect took place in Madison, in the U.S. itself, in a very short period after Mubarak was overthrown and people had signs saying: “The governor of Wisconsin is our Mubarak. We have to fight against the dictatorship”. They were inspired by the occupation of the public spaces in Egypt, in Tahrir Square, and they did the same thing in the Capitol of Wisconsin. The Capitol building was occupied for several weeks, people slept there, they made their own decisions, they had manifestos they were building a new political power to challenge that of the establishment political parties. Unfortunately this movement was almost immediately converted into being part of the two-party machinations in the United States so the unions got caught up into a recall struggle against the governor. That is very good, no one can be against that. But the problem is the two-party system and the idea that one party is no good and we have to get rid of it in order to get another party in.

Part II of the interview will focus on August’s chapter about Obama and the illusion of change.

To go back to the Videos, Interviews and Photos page, Click Here.