Venezuela is being targeted once again by Washington, its supporters in Venezuela and the corporate media. What is behind the headlines?

Here is a YouTube based on my recent radio interview from Washington, D.C.

The Network of Intellectuals in Defense of Humanity (Cuba Chapter) has taken up the responsibility of publishing statements by intellectuals, mainly from Latin America and North America. 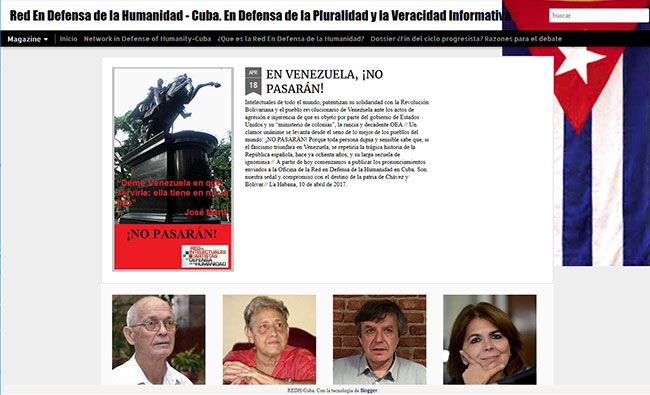 Thus far the statements have been published only in Spanish.

However, this is the English version of mine. 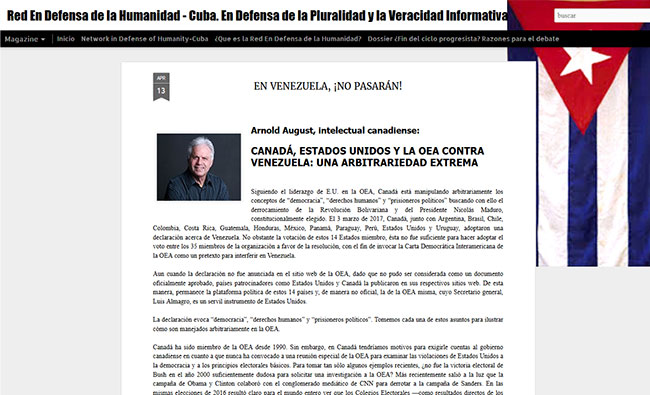 Canada/U.S./OAS versus Venezuela: Arbitrary to the Extreme

By Arnold August, member of the Network of Intellectuals in Defense of Humanity (Canada)

Canada, following the lead of the U.S. in the OAS, is arbitrarily manipulating “democracy”, “human rights” and “political prisoners” to subvert the Bolivarian Revolution and the constitutionally-elected President Nicolás Maduro. On March 23, 2017, Canada along with Argentina, Brazil, Chile, Colombia, Costa Rica, Guatemala, Honduras, Mexico, Panama, Paraguay, Peru, United States of America and Uruguay adopted a declaration on Venezuela. However, these 14 member-states voting in favour of a resolution to invoke the Inter American Democratic Charter of the OAS as a pretext to interfere in Venezuela was not sufficient to carry the approval among the 35 members.

Nonetheless, while the declaration was not posted on the OAS web site because it could not have been considered an officially approved document, sponsoring counties such as the U.S. and the Canada posted it on their respective government web sites. Thus, it remains the political platform of these 14 countries and unofficially of the OAS itself whose Secretary-General Luis Almagro is a servile instrument of the U.S.

The declaration cites “democracy”, “human rights” and political prisoners. Let us take each one of these issues to illustrate how they are their arbitrarily wielded in the OAS.

Canada has been a member of the OAS since 1990. However, we in Canada are justified in asking Canadian governments why it has never called a special meeting of the OAS to consider American violations of democracy and basic electoral principles. To take only some recent examples, was not the Bush dubious electoral victory in 2000 worthy of an OAS investigation? More recently, it came to light that the Obama/Clinton campaign collaborated with the conglomerate media like CNN to subvert the Sanders campaign. In the same 2016 elections, it was clear for the whole world to see that the Electoral College system, as the direct result of the wealthy slave owners that fashioned the electoral process to keep the majority disenfranchised, is not democratic.

Would all these flagrant violations of democracy not be worth of consideration by the OAS? Furthermore, the U.S. is the only country in the West whereby, even after having served their prison terms, millions of felons (depending on the states) lose their right to vote for life either by law or through intimidating and cumbersome recourse to recuperate their suffrage rights. Blacks consist of a highly disproportionate percentage of the victims resulting from these voting rights violations. All this and more, but no intervention in the OAS by the Canadian government regarding democracy in the U.S.

Ottawa’s record on bringing Washington to task in the OAS on violation of human rights is likewise cowardly. During the entire Obama administration Blacks have been gunned down in the streets by the racist state as a vestige of slavery. Does this not consist of the most gruesome example of human rights violations? It is only equalled to the century-long genocide of the native peoples going into 2016 and 2017 as exemplified by the Standing Rock struggle. Yet, not a whimper by Canada in the OAS as this country also ignored the record-number of deportations of Latinos by the Obama administration being followed up and increased by Trump.

Canada’s position in the OAS represents the epitome of arbitrariness. If any country should be investigated in the OAS, it should be the U.S. and not Venezuela.

Canada’s stance does not take into account the anti-U.S. imperialist sentiment of an important section of Canadian society. Specifically, Canadians from all walks of life have demonstrated and issued statements all over the country in support of the Bolivarian Revolution, the heritage of Hugo Chávez and against foreign interference.

The Canadian government’s servile attitude toward the U.S. does however, unwittingly, highlight the significance of the Community of Latin American and Caribbean States (CELAC by its Spanish initials) that includes the 33 sovereign countries in the Americas except U.S. and Canada. CELAC’s further development is the only answer to the OAS which based on the American and Canadian governments’ U.S.-centric outlook on democracy, human rights and political prisoners.

In case you missed it, this is my latest article on Venezuela,
written upon my return from Caracas:

The Venezuela 'Opposition' We Never Hear About