OBAMA IN CUBA: HOW “POLITICAL PRISONERS” MADE THE MEDIA HEADLINES

In the course of President Obama’s visit to Cuba on March 20–22, 2016, the issue of supposed Cuban “political prisoners” took centre stage in Cuba–US relations for at least 24 hours in much of the international mainstream media. The sets of international foreign television outlets were situated on a floor of the emblematic Lonja del Comercio (the fully renovated former Stock Exchange in pre-revolutionary Cuba) overlooking Old Havana. A cacophony of phrases from the reporters about political prisoners emanated from the sets. It seemed that “Obama in Cuba” had become equated with “political prisoners.” The only exception appeared to be TeleSUR, based in Caracas, Venezuela.

How did this come about? In the joint press conference offered by Presidents Raúl Castro and Barack Obama on March 21, Obama stated in reference to the discussions with the Cuban government:

“...as we do wherever we go around the world, I made it clear that the United States will continue to speak up on behalf of democracy, including the right of the Cuban people to decide their own future. We’ll speak out on behalf of universal human rights, including freedom of speech, and assembly, and religion.”

The tone of the US President’s remarks, couched in a very diplomatic speech, was not overtly hostile and did not contain accusations as such against the Cuban government. There was no mention of political prisoners. One can say, as indeed Obama himself stated, that this is the basic narrative of the US when dealing with some countries. However, the haughty White House-lecture to Cuba on democracy and human rights, as many Cuban colleagues justifiably consider it to be, are based on the exclusive notions held by the US of democracy and human rights. They are often directed to some Third World countries on a very arbitrary basis with varying emphasis and priority depending on the affinity of these countries to US foreign policy. 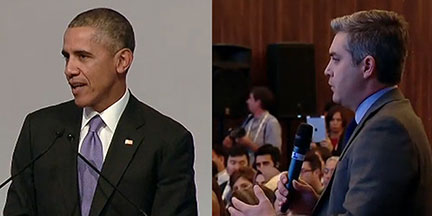 After the presentations by the two heads of state in the joint press conference, the floor was opened to questions from the large number of international and Cuban journalists. Obama immediately recognized the source of the first query: Jim Acosta, the Senior White House Correspondent for CNN. As Acosta indicated in his introduction to his question directed to Raúl Castro, he is a Cuban-American whose parents left Cuba. Such a prelude may serve as credentials, in the eyes of a reporter, to ask any question. This would allow for the ensuing interrogation to be carried out despite the reporter’s virtually non-existent knowledge about Cuba, which has been circumscribed by his deeply ingrained preconceived US views of Cuba.

Obama completed his remarks in this way, according to the official White House transcript:

Acosta addressed his first question to Barack Obama, and then asked Raúl Castro:

“And, President Castro, my father is Cuban. He left for the United States when he was young. Do you see a new and democratic direction for your country? And why [do] you have Cuban political prisoners? And why don’t you release them?”

This question and response then immediately travelled virtually around the globe as headline news, but centred mainly on the US as the protagonist of Cuba. The airwaves were jammed with this controversy. The issue of political prisoners completely dominated international conglomerate news on Cuba for at least 24 hours.

Obama did not have to mention political prisoners, which would have been considered by both the White House and the Cuban government a breach of protocol and diplomatic behind-closed- doors negotiations and exchanges – which is a positive feature of the new Cuba–US relations. Conveniently for the President, the CNN Senior White House Correspondent raised the question for him. However, by Obama’s body language and the look on his face, he seemed to be very satisfied with the question.

Does this mean that it took place as a result of collaboration between the White House and Acosta? Obama and Acosta know each other very well. The CNN correspondent’s role not only brings him regularly to the White House, but has also called for him to travel with the President on many occasions around the globe. Despite this intimate relationship, however, there is no need for them to carry out any conspiratorial agreement.

Noam Chomsky analyzed this dynamic many years ago in his groundbreaking book Manufacturing Consent, based mainly on the study of the US media. He pointed out that mainstream monopoly media are guided by:

“...the selection of right-thinking personnel and by the editors’ and working journalists’ internalization of priorities and definitions of news-worthiness that conform to the institution’s policy.”1

These journalists know exactly what to ask in press conferences, what to write and what to broadcast in order to not only maintain their jobs as correspondents, but also to climb the ladder toward ever more lucrative income and prestigious positions. For example, had Acosta asked the US President – in the multitude of news conferences at the White House touching on a wide variety of issues – about the hundreds of political prisoners in the US, would he have even been around to travel to Havana with the President? If Acosta had had this gumption and interest in human rights as practised in the US, he would not even have been “selected” – in Chomsky’s words – in the first place.

In an earlier article, I wrote about Secretary of State John Kerry’s visit to Cuba on August 14, 2015 to officially hoist the US flag in front of the reopened US Embassy as part of the re-establishment of diplomatic relations between the US and Cuba. One of CNN’s most prestigious anchors, Jake Tapper, was sent to Cuba to cover the event. The article exposes how virtually all the television reports consisted of little more than a litany of buzzwords about Cuba being a “dictatorship” and the “Castro brothers’ tyranny.” This was, of course, amplified and repeated by other anchors in the US-based CNN headquarters in their treatment of this event.

In all fairness, however, one has to admit that not all CNN reporters deal with Cuba with such flagrant media disinformation that borders on hysteria. For example, Chris Cuomo, a high-ranking CNN anchor, is the brother of the current Governor of New York, Andrew Cuomo. Governor Cuomo recently visited Cuba as the head of a high-ranking political and business delegation. He thus has good and respectful relations with the Cuban government. When CNN’s Chris Cuomo covered Pope Francis’s visit to Cuba in February 2016, the rants by his CNN colleagues against the Cuba government and “the Castros” were not at all present. Cuomo was also part of the large delegation of CNN reporters covering the Obama visit. We can perhaps examine his reporting on another occasion. However, suffice it to write for the moment that he wore a traditional Cuban guayabera shirt, given to his father by Fidel Castro.

As for Acosta’s role in Havana in March 2016 and other similar situations that unfortunately seem to be a main feature of CNN, what can one conclude? Primarily the relationship between CNN and the White House can be thought of as not that CNN has a senior correspondent in the White House, but rather that the White House has a trusted correspondent at CNN. This is a very strange situation for a country that lectures others about the need for “independent press and journalists.”

With regard to political prisoners, it seems that no journalist – to the knowledge of this writer – has yet taken up Raúl Castro’s challenge to furnish facts to back up Acosta’s accusations. Given that the media war being waged by the US against the Cuban people is an ongoing news story, we can expect there will be more to say on the matter.

Cuba-US Relations
Democracy in the US
Academic Speaking
Engagements
Book Launches/
Conferences
Videos, Interviews
& Photos
News
Table of Contents
Book Reviews/
Praise for Cuba and Its Neighbours
About the Author
Contact
Arnold August
ESPAÑOL
A free e-Inspection copy for academic use only is now available by request from Zed Books in any country in the world. Click the logo on the right and search for Cuba and Its Neighbours.

If you are in the U.S. and would like to buy the book, click University of Chicago Press. If you prefer a sample hardcopy for academic use instead of an e-Inspection copy, click here. The book is also available at Amazon or Barnes & Noble.

If you are anywhere else in the world (other than the U.S. or Canada) and would like to buy the book, click Zed Books or Amazon.