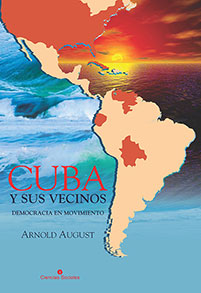 Cuban Magazine Bohemia: Article on the Havana book launch of
the Cuban Spanish version of CUBA AND ITS NEIGHBOURS: DEMOCRACY IN MOTION 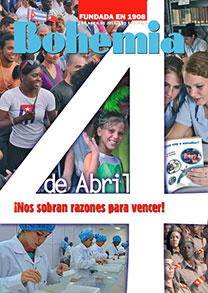 Arnold August/Understanding Cuban democracy.
Defending it shoulder to shoulder, not from an ivory tower.
Text and photos: LUIS TOLEDO SANDE

The works of Arnold August combine academic concerns with real life, ideas with hard work, lucidity with clarity. He holds a Master’s degree in political science from McGill University in Montreal, the Canadian city where he was born in 1944, and Cuba is among his most salient interests. He refuses to fall under the sway of the deceitful propaganda with which the empire and its accomplices have inundated the world; rather, he has managed to get inside the reality of this country and, in so doing, helped to ensure that the truth about it becomes known.

His Democracy in Cuba and the 1997-98 Elections was published in Havana in 1999 by Editorial José Martí. He has also contributed a chapter entitled “Socialism and Elections” to the edited collection Cuban Socialism in a New Century (University of Florida Press, 2004), in the “Contemporary Cuba” series edited by John Kirk, another Canadian who is a good friend of the Cuban people.

Cuba and Its Neighbours: Democracy in Motion was published in 2013 by Fernwood Publishing in Canada and Zed Books in the United Kingdom, “with distribution rights in the United States, where there is keen interest in the topic: that is where the most copies of the book have been sold,” said the author in an interview with Bohemia.

The book – translated into Korean by a progressive South Korean publisher and into Spanish (by Mario Medina González) for publication by Ciencias Sociales in Havana – culminates over 50 articles written by Mr. August on Latin America between 2007 and 2013. During the time that the Cuban Five spent serving unjustly lengthy prison terms in the United States, he wrote a number of articles calling for their release.

These articles have circulated in English, Spanish, and French on various websites. In addition, he has done numerous interviews on U.S. and Canadian alternative radio stations, as well as lecturing at American, Canadian, Puerto Rican, European, and Cuban universities over the last decade and a half. Even if he were not here this year at the Havana International Book Fair, where his book was launched, there would be plenty of reasons for the interview that has provided the material for this piece. 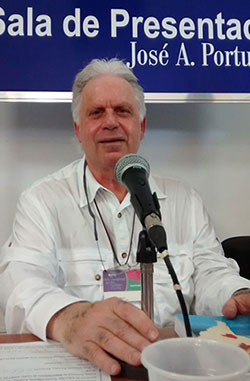 Arnold August appreciates
the reception of his book in Cuba.
He is carrying on his solidarity work
with the countries of the Americas,
now focusing on plans being hatched
by the empire to snuff out the
Bolivarian Republic of Venezuela.

Cuba isn’t just a long-time interest of yours: this is a country with which you’ve had a sustained conceptual and emotional involvement. Still, I’d like to ask you: How far back do your ties with this country go, and how did they arise?

In the 1960s when I was in university, the defense of Cuba was a crucial point for Canadian progressives. I have been concentrating on the country since 1997, but my first visit was in 1991. In order to write my book on democracy in Cuba and the 1997–98 elections, I spent about a year and a half doing research in the country and living alongside ordinary Cubans.

After so much research and reflection on Cuba, what is your view of it now?

At this book fair, I’ve spent hours browsing through the stands and I’ve seen the quantity, the quality, and the diversity of the books published in Cuba with my own eyes. It’s been impressed upon me that the Cuban Revolution is, or continues to be, a producer of education, consciousness, and knowledge not only for Cubans but for the whole world. That’s only one characteristic of the Revolution, but one that encapsulates its importance for me. It shouldn’t be overlooked.

Do you have a clear idea of how the political model discussed in your book is understood in Cuba itself?

I am not an apologist for the Cuban political system, and I do not present the road taken by Cuba towards democracy as any kind of ideal. But neither am I interested in criticizing it. Unlike many foreign authors, I do not consider myself an “adviser” to the Cubans. I do believe that there are many Cubans involved in People’s Power, in the universities, in the media, who have a realistic vision and are focusing on how to improve the political system within the constitutional order established by the 1976 referendum. I am on the same page as those Cubans.

There is extensive, serious debate in Cuba about how to go about making these improvements. My book is intended as an entry in that debate. I think there should be more publications like it. As far as I know, and I may be wrong, there is no other book on offer at this Fair that concerns itself with the Cuban system and its electoral patterns.

The book focuses on Cuba, but its title suggests that it also applies to other places.

Cuba is the main country I look at, but not the only one. Some of its neighbours that I also study are Venezuela, Bolivia, and Ecuador, which are equally positive examples of democracy as it really is, which means an embodiment of people’s power. Another neighbour – a very different neighbour, as you know – is the United States. The subtitle Democracy in Motion is intended to indicate that I don’t consider democracy a fixed structure; it has to be evaluated and measured according to its own dynamic. We have to look at whether the political system in which it is embedded is truly participatory.

If we look, for example, at what is taking place in Venezuela today, we can see that people’s participation in the defense of their own sovereignty and democracy is vital. I also mention Venezuela because, thanks to my agreement with the Cuban publisher of this book, Ciencias Sociales, we’re now able to deliver the Spanish version to publishing houses in other countries. There are a number of possibilities, and we are in contact with the Venezuelans. I should note that participatory democracy and the legacy of Hugo Chávez have a special place in the book.

What would you add now about Cuban democracy, in and of itself, and also as it relates to other models being promoted around the world?

To be frank, there’s no way to answer that question in one interview. I would invite anyone interested to read the book.

In his presentation of this book at the fair, Ricardo Alarcón de Quesada, who wrote the foreword and has extensive knowledge of the relevant issues, praised the author for his painstaking research and intellectual integrity. Arnold August is a member of the Latin American Studies Association (LASA), the Canadian Association for Latin American and Caribbean Studies (CALACS), and the Centre for Research on Cuba at the University of Nottingham. In 2013, he received the Félix Elmuza award, the highest honor bestowed on domestic and international colleagues by the Cuban Journalists’ Union. 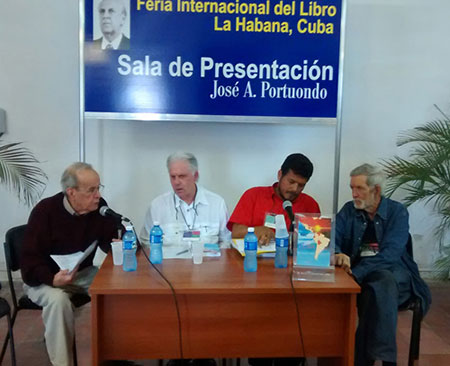 The book was presented at the fair by Ricardo Alarcón de Quesada, who wrote the foreword and has extensive knowledge of the issues in question. Flanking him, left to right, are August and representatives of Editorial Ciencias Sociales. 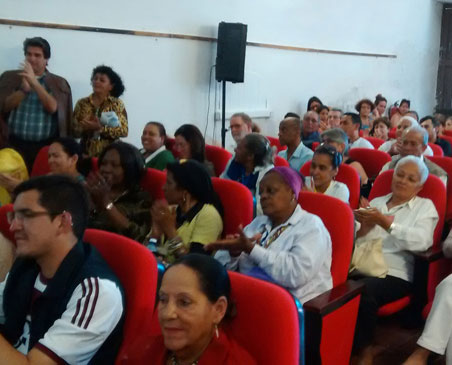 The José Antonio Portuondo conference room was filled to capacity.

Among the websites that have carried the largest number of Mr. August’s articles is www.globalresearch.ca, which he calls “progressive, and one of the most important sites in the world,” as well as his own web page. For his pieces on the Cuban Five, see www.globalresearch.ca and www.democracycuba.com/Blog