The Cuban Five One Year After 17D: Humble Voices from Quebec
By Arnold August, December 17, 2015

One year ago today, the news hit us like a bombshell. It is fresh in my mind today as if it had taken place yesterday. Many people go down memory lane. So do I. However, to refresh my memory and to see if my initial reaction stands the test of time, I went back to what I wrote after 17D. I was in the process of responding to questions for an online interview with an alternative web site in the US. This writing started before 17D. However, as you may guess, the web site added another question which turned out to be Part II of the interview. Here is the initial portion written and published on line on January 7, 2015

“KP: What is your take on the seeming rapprochement between the United States and Cuba?

AA: I was overjoyed to hear that the three Cuban Five who remained in U.S. prisons were released as part of a prisoner swap. On that aspect of the December 17, 2014 U.S.–Cuba agreements, I immediately wrote an article. That was the easy part. Also relatively simple was a shout of victory: at long last, the unconditional establishment of diplomatic ties and embassies was assured for the first time since the U.S. had broken off diplomatic relations with Havana in 1961. In addition, Cuba is to be removed from the U.S. arbitrary list of countries sponsoring terrorism. These decisions represent a clear victory for Cuba.”

The article referred to concerning the Cuban 5 was written the very evening of 17D and published the next day by Global Research. This is it:

Freedom for the Remaining Cuban Five,
By Arnold August, December 17, 2014

“On December 17, 2014, simultaneous public television announcements were made by Cuban President Raúl Castro and U.S. President Barack Obama. They both indicated that steps are being taken toward the normalization of relations between the two neighbours. In this context, the two presidents announced what is known commonly, if not diplomatically, as a “prisoner swap.” This includes the liberation of Alan Gross, held in a Cuban prisoner for illegal activities that violated Cuban laws and sovereignty, and one other prisoner held on the island. For the Cuban side, the governments announced the simultaneous release of the three Cuban Five who remained in prison: Gerardo Hernández, Ramón Labañino and Antonio (Tony) Guerrero. All three prisoners were immediately repatriated to Cuba the same day.

This exchange of prisoners on humanitarian grounds is based on consensual agreements by two sovereign countries. This means that Gerardo Hernández – who had been serving two concurrent life sentences on the basis of false accusations that were never proven in court – will not die in prison. He is now free with his family and his wife, who was denied the right to visit him for the more than 16 years that he spent in U.S. jails and penitentiaries. This was the first thing that came to my mind when I heard the reports this morning. Gerardo will return to Cuba alive and not – had this swap not taken place – as a cadaver on a cold stretcher. While Ramón and Tony would eventually have been freed (on October 30, 2024 and September 18, 2017, respectively) – assuming they survived their lengthy sentences – Gerardo was in fact condemned to a tortuous and slow death within the walls of the savage jungle known as the U.S. penal system. He likely never would have seen his wife again, even under the coldest and most hostile of circumstances that constitute “visiting rights.”

The second emotion that swept over me was that Ramón and Tony are also now finally free and in the arms of their family members, who dreaded never seeing each other again. This was the case with Tony’s mother, who lived with and despaired at the thought that she would pass away without ever again freely holding her son in her arms. They are now together. Ramón’s wife will finally see the fruit of her long struggle over these many years in favor of the freedom of all members of the Cuban Five. Ramón’s daughters have finally been awarded a family atmosphere with their father back in Cuba, where he belongs.

The third thing that came to mind was the already freed Cuban Five members Fernando González and René Gonzalez. Whenever I have seen them on Cuban television, I have felt their emotions and appreciated their words: they would never feel free and in fact be free until the other three Cubans were back at home. It must have been grueling for them to taste freedom, knowing that their brothers did not yet have it. Their cruel reality ended today.

And so, finally, the Cuban Five are free.

Special recognition must be given to the Cuban government, in addition to the millions around the world who have demanded that justice be done. The Cuban government and its foreign affairs ministry have been outstanding figures on the world scale since January 1, 1959. This tradition has been characterized, among other features, by the upholding of principles while being flexible on tactics. I have never seen the Cuban government give one inch on principle. However, they have also used flexible tactics to advance not only their cause, but also that of the peoples around the world. This prisoner swap, part of the wider context of normalization of relations between the two neighbours, will enter into the annals of Cuban foreign policy as another of its great triumphs.

Regarding this last paragraph, allow me to expand. If the Cuban Five won their freedom based on their own infinite courage, as I still firmly believe, then what was the role of the many individuals and solidarity organizations? I believe that we all played an important and crucial role. We did this by allowing the Cuban Five to discover by correspondence mailed to the penitentiaries that they have the full continuous support and solidarity of millions of people around the world and well-known personalities. This, as we know, served as an infinite source of persistence and courage for them. And, by the way, the prison authorities and guards had to keep this world-wide support in mind in their treatment of the Cuban 5 or Los Cinco as they are known in Cuba. Just to stay alive in the jungles of US prison is a heroic feat in itself. Every bit counted.

One of the series of events that came to their knowledge was the activities of Quebec’s “Comité Fabio Di Celmo for the Freedom of the Cuban Five” (CFDC). The Cuban Five knew about it, but unfortunately its persistent activities are otherwise not that well known...at least not as celebrated as it should have been. This is so perhaps because all our communiqués were written in French, no match for the overbearing predominance of the English language in the word. In Latin America and the Caribbean, aside from the Spanish and Portuguese mother tongues, French is lost in the sea, well after English as a second language. I guess that I have an advantage in having as a mother tongue English, unlike the majority of activists in the CFDC, while French is my second language. Thus I am putting this advantage to use today, writing in English.

The CFDC was established on February 28, 2006. Shortly after that, the first of a monthly picket line was initiated in May 2006 in front of the US Consulate in Montreal. This activity was inspired by the example of Vancouver which had already started monthly picket lines. In Montreal, they continued until the full release of Los Cinco on 17D 2014 through rain, snow, freezing weather, as well as more clement temperature. That is nine years. Quite a feat! 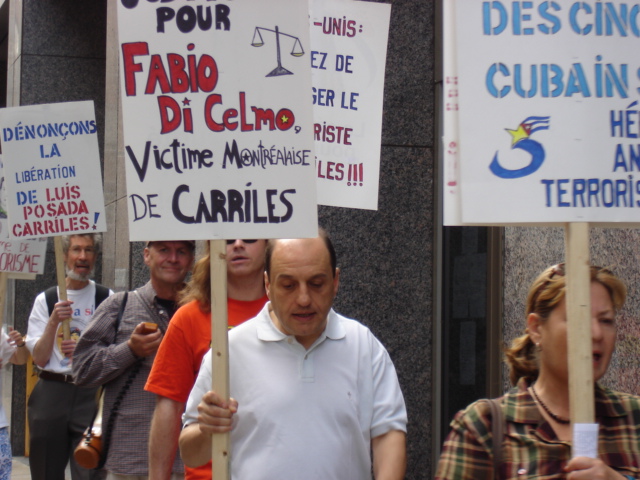 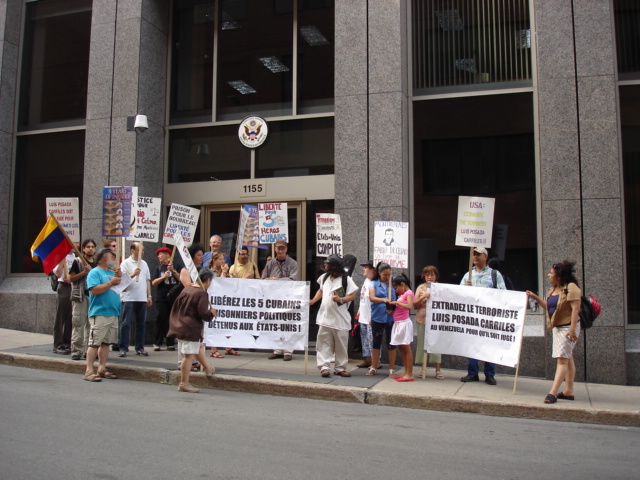 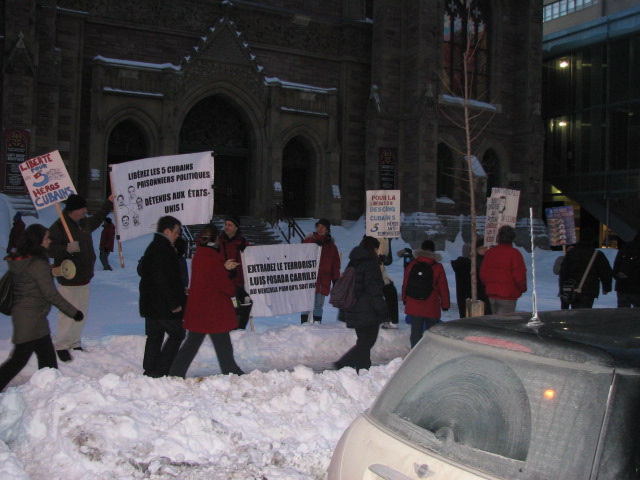 As a member of firstly, the FCDC and later the International Committee as well, I had taken up the responsibility of writing to the US authorities, including President Obama. To read these letters that go back to 2008 and 2013 and my evaluation of them from today’s perspective, click here.